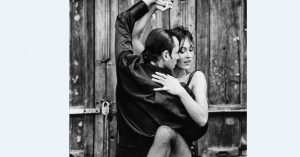 Many marriages get stale after awhile, often from lack of attention and the intention to keep connecting deeper on a regular basis. Lately, we've both been thinking about ways that we could experience the gifts of connecting even more than we do already.

With that in mind, here's what Otto said some time ago that not only shocked Susie but some of our closest friends as well...

Well after a few calls back and forth with the dance studio to set things up, we took our first ballroom dancing lesson. Because Otto has never had a formal dancing lesson and considers himself "rhythmically challenged," this lesson was a big leap for him.

As we tried out the fundamental steps of the rumba, tango and fox trot just to get our feet and bodies moving, the dance instructor gave us two suggestions for connecting deeper on the dance floor...

Being the relationship coaches that we are, we couldn't help but compare these two suggestions about dancing to ways to improve marriages and relationships.

Well here's our take on these dancing suggestions as they pertain to marriages and relationships and connecting deeper...

We take small steps to make our marriage better every day and help others to see how they can do it too in their lives.

A small step for one married couple we once worked with in our coaching practice was to make the commitment to eat breakfast together every day as their special connecting time--without the kids--because they realized that they had grown apart over the years.

Now, they may or may not have considered this to be a small step because it involved being committed to doing it every day and changing their old routines.

The point is that they took a step toward connecting with each other and rekindling their love for each other instead of allowing their relationship to die a slow death because of inattention.

So what would make your relationships better, closer and the two of you connecting deeper?

What one small step can you take, no matter what type of relationships that you have currently in your life, to create more peace, more love, more connection or whatever it is that you want?

Do you need to dissolve some walls that have been built between the two of you?

Take some time to answer those questions and then take that one step.

The second "dancing" suggestion that we were told was to keep moving, not stopping at one particular foot sequence but to keep repeating it.

How does that pertain to your marriage or relationships?

When you've taken your first step toward creating a better marriage or relationship, keep doing it over and over.

It's been said that for anything to become a habit, it takes at least 21 days of doing it over and over. You have to understand that what you've been doing in your life that keeps you from having great relationships is probably a habit and it's takes time to change those habits.

If this describes your life, only you can decide whether you want to keep doing those "things" or to let some of them go and start spending some time connecting and even having fun with those you love.

The point is to free up some time in your life so that you can begin creating some habits--things that you do over and over--that will bring you closer to each other.

No matter what happened at the following dancing lessons and even if we didn't remember the exact steps we were shown, we remembered to take small steps and to keep moving.

We hope you also remember and apply the suggestions that we were given. We think they make great advice for marriages as well as dancing.