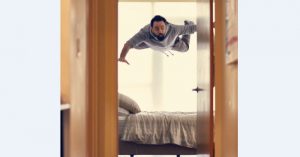 One of the few things we humans can always count on in life is we’ll have to deal with CHANGE.

It’s a fact of life (especially since the Pandemic) and yet we resist it, find it scary and often will do almost anything to avoid it when the truth is, change is unavoidable.

We’re going through life just fine (it seems) and all of a sudden “BAM!”… something happens that causes big or not-so-big changes in our lives…

And without a moment’s notice we’re rocked to our core.

Someone close to us gets sick; we change jobs; our partner changes jobs or just changes; we get sick; we move to a different city or across town; a good friend leaves us; we get married; we get divorced; we have to take care of aging parents; we lose trust in our partner…

This is life and when we expect that our life won’t change, it does.

And when it does, we’re knocked off-kilter at least for awhile.

So if change knocks you down, how can your recovery be quicker and easier when it happens?

Angie and her husband Sam had been married 10 years when he was transferred to an office where his ex-wife worked.

This transfer meant that he would see her every day and would have to occasionally work on projects with her.

Although never jealous before, Angie could feel it welling up inside her every time he kissed her good by when he left for work.

Intellectually she knew there wasn’t anything between Sam and his ex but her emotions told her otherwise.

She began to make up all kinds of stories that had the two of them sharing old memories and even hooking up.

She tried to keep all this from Sam but found that she had been distancing herself from him and he had no idea why.

Not wanting jealousy or this change to ruin her marriage, Angie came to us for help.

As we worked together, she saw that she was creating the worst case scenario with her thinking and then reacting from that thinking.

When she saw that Sam was still very loving toward her in spite of the way she had withdrawn from him, she began focusing on their connection.

When she was able to talk about her insights with Sam, he explained how he was keeping his distance from his ex as much as he could because he wanted it that way.

He also explained that he liked his new job and didn’t want his ex to come between the two of them.

Angie’s jealousy faded as she realized she had been looking at a mirage of her own creation and she didn’t have to fear change.

If you’re fearful and don’t know how to deal with change, here are 3 tips…

1. Know that change in life is a given.

When we know it’s always going to happen, we aren’t bracing for it. It’s just inevitable.

If you’re like us, our usual holiday plans have been turned upside because of Covid.

2. Flow with the change instead of fight against it.

Sometimes we can do something about the change and sometimes we can’t. The trick is to know what changes you can make and those you can’t.

To flow with the change, you have to allow your thinking to quiet and then you’ll get direction from the part of you that’s that still, small voice.

When you can listen to that voice, you’ll be able to take needed action–or do nothing. But you’ll know what’s best.

We all have that inner voice and the trick is honoring yours as well as what those closest to you are inspired to do.

3. Know that change is for your good even though it may not look like it at the moment

So many times in our lives, change appears to be a “bad” thing but actually it turns out to be for our benefit in the long run.

When you can look back at changes that have happened in your life that appeared to be unfortunate but you can see a silver lining, you get the idea that maybe changes have a purpose.

They wake us up to something new in life–(even this pandemic)–some new experience, new people, new learnings.

Our lives expand through change and if we can keep that in mind as we go through it, it all becomes so much easier!

If you’re dealing with changes in your relationship and life and are struggling, go here to contact us…