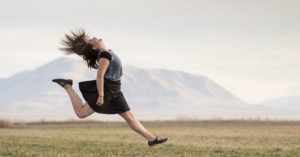 You know how sometimes you can see all the possibilities for yourself but other times you can’t see anything that even resembles something new?

Awhile ago a woman asked for our help when it came to her jealous feelings that kept surfacing because her husband had had an emotional affair several years ago.

She had shut herself off from him in so many ways even though he had stopped the relationship years before and had recommitted to her and the marriage.

When jealousy strikes, she couldn’t see any way things could change because the fact was that he HAD betrayed her trust.

As we talked, she began to see that her fears that it would happen again (which felt so real and concrete to her) really were a mirage because no one knows what the future holds.

We only have the present moment.

She saw some possibilities for how her relationship could be better in the present.

We all have the ability to see new possibilities about a situation because they are flowing to us all the time.

We shut them off with our incessant, circular, non-stop thinking–usually about the worst-case-scenario.

There’s no way new thought can emerge if we’re stuck in a loop of thinking!

An small example of this in our everyday life is this…

Last night as Otto watched Susie cut up a watermelon, the thought crossed his mind…

“She’s doing it wrong! My way is better!”

Then he laughed to himself, knowing that her way was probably just as efficient as his way and if he chose to hang onto the thought that she was wrong, he’d damage our marvelous connection.

He realized that if he opened up to the possibility that her way wasn’t wrong, there’d be a whole lot more love available to both of us.

Where have you shut off the possibility of new thinking emerging about a person or situation?

While it doesn’t excuse what happened in the past, it does allow new life to flow.

Possibilities are always there. We just have to relax our rigid thinking and look toward something new.