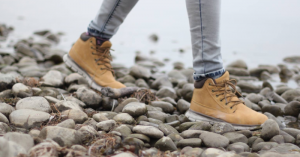 If you’re honest, you’d probably own up to times in a relationship (any relationship) that could be described as “rocky.”

You know–times when you struggle over a particular situation, you have two different points of view and both of you seem to say things that irritate each other.

But that passes, you find your equilibrium and you get along once again.

If you’re saying you have a rocky relationship, that usually means there’s constant disagreement, it feels unstable and is full of difficulties that never get resolved.

A rocky relationship is just what it says–full of rocks that you trip over or have to carefully walk around.

If you’re finding yourself in the middle of a rocky relationship the most important thing to understand is where the rocks come from.

Most people believe that the rocks that cause all the problems, pain and disappointment are outside of them.

They believe if their partner (or other person) changed and thought like they thought, those rocks would disappear.

But the truth is that those rocks come from your thoughts that you believe, make real and your consciousness brings to life.

It’s virtually impossible to have a smooth-running relationship if you or your partner keeps putting rocks in the road.

She was cheated on in her previous marriage and she couldn’t stop thinking about the probability of it happening again in her new relationship.

Unconsciously, she put “rocks” in the road of her new relationship every time she became suspicious and grilled her boyfriend over what she imagined him doing (and he actually wasn’t doing).

She was jealous, constantly wary, blaming her boyfriend, waiting for the other shoe to drop–and to be cheated on once again.

She knew she had to do something about her rocky relationship because he was beginning to pull away from her so she came to us for coaching.

During our time together, she saw that she was creating those “rocks” in her relationship by her constant thoughts and fears about being cheated on.

She saw that she didn’t have to believe those thoughts that nagged at her, always under the surface.

As time went on, she saw that those thoughts faded into the background when she no longer gave life to them.

She was able to relax and have a “normal” relationship with a great guy.

Like Molly, if you’re in a rocky relationship, you can choose another road to go down.

You can see those rocks for what they are.

When you allow your thinking to settle without trying to fix anything or hold onto old fears, new thought will appear.

And when new thought appears, you’ll always know what to do next.

If you need help sorting it all out, here’s a way to guide you…