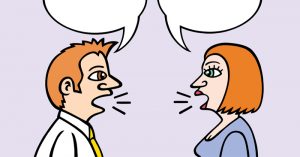 Awhile ago, Otto saw a heated argument unfold that got so crazy that he thought the police were going to have to be called…

Otto watched a store clerk get into a heated argument with a respected doctor and businessman that got so bad that they ended up screaming at each other.

As Otto watched, he saw the clerk constantly interrupting the customer and telling him that he “needed” to hear HER out (even though she repeatedly said the same thing).

It was a crazy scene to watch and it got so loud and the two of them were so angry (as Otto saw it)–all because both of them just wanted to be heard.

This entire “fight” could have been avoided if the clerk had only allowed the customer to say what was on his mind without her getting caught up in reacting and defending.

Isn’t this the way it is in our personal relationships?

We just want to feel heard.

We want to feel important.

We want to feel respected.

This shows up differently for every single person and if you stay away from reacting and defending–and just listen, disagreements and fights will usually dissolve.

One summer the two of us got into a rousing argument (yes, we do sometimes) but it didn’t last long…

We have a good crop of poison ivy at the back of our lot and one of Susie’s “jobs” for the holiday weekend was for the two of us to tackle this problem.

At the time, we weren’t particularly good at working together on household “fix-it” projects and this one wasn’t any different.

So we made up stories about what the other was thinking and reacted with anger and impatience.

It wasn’t until it rained and we had to stop what we were trying to do that we really listened to one another.

Otto hadn’t understood Susie’s strong desire to get rid of the poison ivy that weekend.

Susie was still expecting Otto to be like her father and ex-husband and take charge of these kinds of situations.

When we really listened to one another, it became clear that this was a bigger job than we wanted to tackle and we’d hire someone to do it.

We listened, we came up with a plan and any anger just faded away.

All any of us wants is to feel heard and understood but when we’re so blinded by “being right,” that can’t happen.

It doesn’t mean that you always get your way but you can come to another way that works for both of you.

While we know that anger is a human reaction, it doesn’t solve anything unless you can see it for what it is.

Your anger is just a sign that there’s something to look at more deeply within yourself, deeply listening to yourself and the other person.

At any moment you can make a fresh start.

We did that day and you can as well.

Have a question about arguments you may be having with someone? Contact us here…