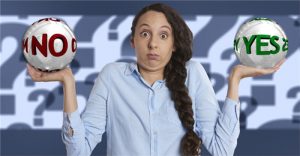 Lying to to yourself (especially when you can’t see it) is one of the biggest obstacles to truly connecting with the people in your life.

Lying to yourself either about how things really are or how you think they are (when they’re not that way) can create huge barriers to the love, intimacy, success or whatever you want in your life…

And so often we’re are blind to it!

Or seeing it as it really is?

She had a history of being jealous and in this new relationship, she didn’t want to blow it like she had in the past.

But she couldn’t seem to get past her fears that her boyfriend would cheat on her if he was away from her, with his friends or at work.

She found herself texting him every few minutes when they weren’t together and she couldn’t seem to stop.

She didn’t know if she was lying to herself or if there really was something to pay attention to so she called us for a conversation.

1. You get signs or nudges from your inner wisdom but you ignore them

We all continually get signs and inner nudges but often we believe the ones that are the loudest–(not always the smartest, truest or most accurate ones to follow)–from the thoughts we believe and keep alive.

Because the signs from our inner wisdom are often overshadowed, we ignore them.

As we talked with Christy, she saw that her thought that her boyfriend would cheat left to his own devices without her controlling him was the one that was the loudest.

This thought was from her memories of past experiences and not from what was actually happening in the present.

She realized that when she allowed her uncomfortable feelings to surface without doing anything, she could see they lacked substance.

There was no evidence that he was cheating and in fact, a quiet voice inside her said that he was a good guy.

2. You make excuses or pretend that circumstances aren’t as they really are

When we lie to ourselves, we can make up all sorts of excuses for our behavior or the behavior of others and turn a blind eye to what’s actually real.

Christy realized that she had been excusing her constant texting to her boyfriend as something she “had” to do to keep him engaged and thinking about her.

She had lied over and over that this was a “good” thing when the reality of it was that he was thinking about her but not in a loving way.

She saw that when he ignored her texts, she got even more insecure and clingy.

She saw that he was becoming more and more distant and her strategies to keep him engaged were backfiring on her.

3. You hope that it will change without any evidence that it is.

While hope isn’t a bad thing, it becomes a barrier when it covers over what’s truly there to be seen.

But she now saw that they had just created an illusion of control that she could no longer believe in.

She’d be more peaceful and happier.

Even though we’re telling Christy’s story, this could very well be anyone’s story…

And this is only one example of how lying to ourselves plays out.

When we lie to ourselves, we’re living in a dream that ultimately doesn’t serve us.

What if the way things are is just perfect and we don’t know it?

What if living in the present moment is for our highest good?

What if there’s more love in the present moment than we ever realized?