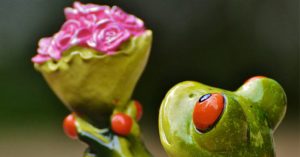 Because it’s getting close to Father’s Day, every year about this time the same thing happens in Ruth’s relationship with her husband, Barry–

And she doesn’t know what to do about it.

Ruth was frustrated because he was becoming more distant as time goes on and nothing she seems to do is getting him out of it.

He’d had a fight with his father years ago on Father’s Day and and everytime it rolls around, the anger that he carries around with him just gets worse.

Although he doesn’t want to, he takes it out on everyone close to him, including Ruth.

Barry didn’t realize it but he had walled off his emotions and now he barely talks about anything other than work.

Ruth feels like she can’t communicate with him anymore and when he does answer her, it’s usually a short, cutting remark.

The truth is that many couples who can’t seem to communicate don’t realize how much anger and hurt about the past they’re holding onto–whether it has to do with each other or not.

It’s so sneaky that it creeps into every interaction without your conscious recognition that it’s even happening.

He came to discover just how much hurt and anger he had been carrying around from his past and how it had crept into different parts of his life without him realizing it.

He began to see with new eyes how many situations when he was growing up he had misconstrued when the truth of what really happened emerged.

As this happened, he began to feel peace like he had never felt before.

Parts of him had been stuck in the past and holding onto these hurts, upsets and disappointments for 10, 20. 30 and in some cases 40 years.

When he saw that he didn’t have to relive those memories any longer, he felt freedom from the weight of it all that he was no longer carrying.

You see when we carry around hurt and anger from the past, it becomes like picking up huge boulders and putting them on our backs.

They get heavier and heavier as the years go on and they interfere with our connecting with others, especially those we love.

Why do we hold onto these hurts from the past?

–We don’t want the person who hurt us (even if they are no longer in our lives) to get away with anything and possibly do it again.

We have thinking that says that if I let go, forgive, and move on, I’ll be blindsided again and I don’t want to be a doormat.

Somehow, we think we’ll be safe if we not let the person “off the hook,” forgive, and act like nothing happened.

–We have a loop of thinking that repeatedly relives the memory of the hurt or betrayal.

The truth is the more we run this “loop,” whether consciously or unconsciously, the deeper our suffering and the more distant we become from others.

So who needs to forgive or forgiveness and for what?

We have a little different take on forgiveness than most…

Forgiveness is nothing you “do” because relief happens when you realize that this thing that happened is only happening in the present moment because you’re keeping it alive.

Yes, it did happen once (or maybe many times)…

And you can certainly decide whether this person is trustworthy now or not and if you want he or she in your life.

You do have choice.

If you do want to have a relationship with this person, letting go of trying to control what might happen and dwelling on the past builds walls and prevents connection.

Barry has been carrying around anger about the fight with his dad from many years ago and is now numb to not only Ruth but to the joy in life.

To start to shift all of this, he can begin by accepting that yes, the argument did happen and that argument doesn’t define his dad as a person.

He can start to notice moments of connection with Ruth and others.

He can start living in the present moment and not be held hostage by the past.

If he feels so inclined, he can reach out to his dad–not to rehash the past but just be with him in the present moment.

Ruth can be supportive of Barry but not try to “fix” him–and she can focus on having fun with him again.

When you start to see that the only thing you’re ever dealing with (about the many upsets in life) is your own thinking you’re believing in the moment–your world starts to get lighter and easier.

Your relationships start to get filled up with more ease, flow and joy and any outer success you want in your world starts to become much easier since you aren’t carrying around all that baggage from the past.

This is what we’ve seen in our lives and as you work with this, we think you’ll start seeing it happen in your life as well.

If he does want to start over, he has to know that his thoughts will come and go but he doesn’t have to believe any of them or latch onto them.

If you truly want to, it is possible to start a new relatonship with someone who has hurt you in the past or with someone you have hurt.

It takes looking at the person with “new eyes” and allowing what’s happening right here, right now to be more important than what happened in the past.

But that’s where the magic always happens–in the present moment.