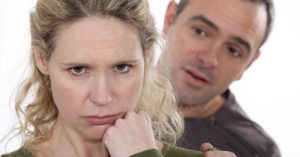 Usually we don’t even realize that we have them until we’re disappointed that something didn’t turn out the way we thought it should or someone didn’t say or do something we thought they should.

And why is this a problem?

Expectations are really thoughts that we’ve made into a “thing.”

It’s a problem because we’re on auto-pilot much of the time when we’re not aware that our thoughts that we believe are ruling our lives. When that happens, we react in ways that build walls and separate us from others.

The two of us have discovered that when it comes to expectations, it’s important to remember that we all have them and we all create them from past experiences and habits that we may not even be aware of.

She loved her husband Tom but over the years, she had become increasingly annoyed at how slow he was at completing projects at home.

He would say he’d do something like replace the shower head in their bathroom but then he might get to it weeks later or not at all.

She was frustrated with him and thought that maybe he was dragging his feet because he was lazy and really didn’t want to do those jobs around the house. There seemed to always be something more important that he would do.

On the one hand, she expected him to do these jobs and on the other, she expected that he would forget about them and they’d never get done.

Even though she knew it didn’t help, she found herself repeatedly reminding him and he would usually get angry, telling her to stop nagging and that he’d get to it.

This went on until they both saw that expectations, lack of trust and these arguments were putting a strain on their relationship.

They agreed to calm down and take a new look at this dynamic that they often created between the two of them.

Claudia saw that underneath all the blame was that she expected him to be like her father who was very efficient and knowledgeable about fix-it projects.

When Tom settled down, taking the blame out of it as well, he saw that he didn’t have much confidence in his abilities as a handyman. In fact, he expected that every project would be difficult, time-consuming and above his skill level.

When they were able to listen to each other about what they had discovered, they felt a closeness and understanding they hadn’t felt in a long time.

Because they both saw something new, they were able to come up with a plan that they both could agree with for handling home projects in the future.

They both were able to see their expectations for what they were–simply made up–and that they didn’t have to be ruled by them.

Are there expectations that are unconsciously ruling your life?

If so, can you open up some space around them so you see something new?