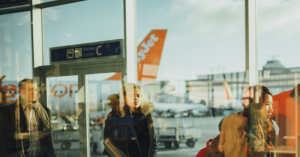 Have you ever witnessed an interaction between two people that just blew you out of the water?

We did on our recent return trip from a fabulous Florida vacation and the interaction we saw was so good, so powerful and such a great example of how to communicate with kindness, love and respect that we just had to tell you about it….

So here’s what happened…

As we sat on the hard, plastic bucket chairs waiting for our flight which ended up being cancelled (that’s another story)…

We couldn’t help but notice a father talking quietly with his daughter who were sitting across from us.

The father was in his early 30’s and had the name Clarissa Ann tattooed in a large script font on the inside if his right lower leg. The daughter was 9 or 10 years old and had long blonde (almost white)hair and purple glasses.

What touched our hearts about how they interacted with each other was how present he was, how he listened to her, and how clearly he communicated as he looked in her eyes.

As we eavesdropped, they talked about the stuffed animal she had with her, how she felt about school that was starting soon and whether she was getting her hair cut or not.

He asked her if she was nervous to get on the plane and when she said she was, he told her that sometimes he is too.

When they left to board their plane, we were so grateful to have seen such a beautiful interaction between two people, let alone that they were father and daughter.

We got to see once again how presence, listening and clear communication created a connection.

Sometimes this can be uncomfortable but if it is, start small but start. When you look in someone’s eyes as they are talking or you are talking, it says that they are important to you (more important than what’s going on in Facebook).

2. Listen without interrupting and ask questions.

Many of us have a tendency to finish each other’s sentences with our thoughts. But what we’ve found is that we can’t know what someone else is thinking and interrupting them with our ideas shuts off connection.

That’s why just listening with your FULL attention without interrupting is so important.

Listening and asking questions to learn more shows respect and creates connection like nothing else can.

3. Be clear in your communication.

This father did not talk down to his daughter but spoke clearly and thoughtfully. He treated her like an equal–someone worthy of his full love and full presence.

When your questions and responses are clear, there’s no room for assumptions or misunderstandings.

The friend we were staying with in Florida told us that she noticed how clearly the two of us communicated with one another.

She said that she often makes wrong assumptions that end up creating havoc in her relationship when simply stopping, asking a question or saying what you’d like could clear it all up.

Communication doesn’t have to be hard.

Start today to use these simple communication tips and see how your relationship changes for the better.

If you want more great communication tips like these, go here to find out more…