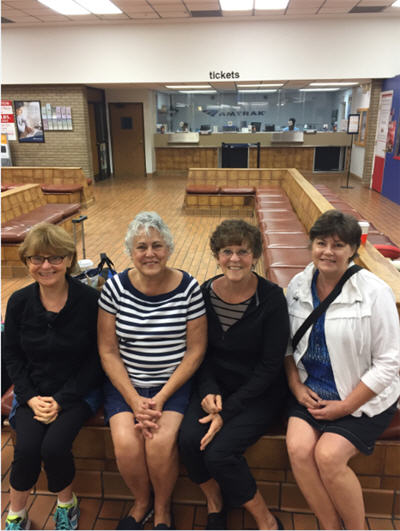 A couple of weeks ago, my sister, two cousins and I took the train from Richmond, Virginia to New York City for our yearly “cousin adventure.”

We had purchased tickets ahead of time for the Carole King show, “Beautiful,” a 911 walking tour, our hotel and of course our train tickets.

My cousin put the printouts in a folder and told me (the oldest) not to let her lose them.

I had a niggling thought the the folder wasn’t the best place for them but ignored it.

Penn Station came up on us in a hurry and as we hurried off the train with our luggage, up the stairs and onto the street, my cousin stopped and got this terrible look on her face.

She had not grabbed “The Folder” with all the tickets which she had left in the seat pocket in front of her on the train now headed toward Boston.

At that moment, blaming (and shaming) words could have flown out of our mouths–aimed at each other and ourselves.

We just regrouped and made our way to the hotel since we did know the address and name of it!

In this digital age, it wasn’t too difficult to reprint all the tickets with the help of the hotel.

But what’s important here was that our trip could have turned unpleasant from resentment and criticism but we didn’t waste time doing that.

In these kinds of circumstances, people tend to lay blame where it’s easiest to throw it whether at yourself and others.

I know I’ve certainly blamed myself for being “stupid,” “not good enough,” and a myriad of other negative thoughts in the past and at times, I’ve blamed other people for what I perceived they’ve done wrong according to me.

But lately and certainly on our NYC trip, I realized that blaming never got me what I wanted in the moment.

I didn’t have to be blaming anyone. I just had to get quiet, regroup and point myself in the direction I wanted to go.

And you don’t have to fall back on blame either–even though it almost happens automatically.

Life does hand us unpleasant circumstances from time to time and it’s which thoughts we attach to that determines our level of ease and happiness.

Blame, whether toward self or others, is a waste of your precious life.

Instead, make the choice to see what you see in that moment and take the next step toward what you want.

Sometimes, that’s all you can do.

And when this happens without blame, there is more love in the world–which is what we all want.