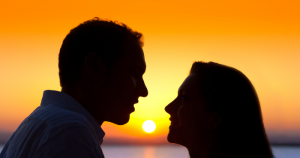 No one wants bad relationship advice…

After all, how are you going to resolve your conflicts if you can’t talk about them?

But here’s the problem with “talking it over”…

In any conversation, each person has a goal whether you’re aware of it or not.

And in conversations like these, the goal is usually to persuade the other person to think like you think.

It can push you even further apart than you were without even realizing it.

Every time Jane wanted to talk about some issue that she perceived she and her husband John had differing opinions, he would clam up and even walk out of the room.

He didn’t want to talk about IT!

She kept trying to get him to talk by telling him what she thought about the situation and then asking his opinion but he’d just clam up even tighter.

She was frustrated that he wouldn’t talk and she felt herself pulling away from him, especially when it came to being intimate.

When she came to us for coaching, Jane was very upset and questioned her whole marriage with John.

Through coaching and our Magic Relationship Words program, she learned how she had inadvertently been pushing him to open to her in ways that only shut him down.

She learned to slow down, focus her attention on really listening and ask a question with genuine curiosity like…

“Help me to understand what you’re thinking about this issue.”

When Jane did ask John that question in a calm, curious way, he was quiet for a few moments (and hard as it was, she allowed space for the silence).

Then, because he didn’t feel “wrong” or pressured, he was honest and told her.

He also told her that he works problems out in his head before he speaks and he’s never ready to respond when he thinks she needs him to–and he feels pressed against the wall.

He said that he gets frustrated and then can’t think of anything to say.

She was then quiet and asked him what it would look like to him if they could calmly talk about issues without both of them being frustrated.

As he offered some ideas, Jane became excited to try some new ways of relating to one another.

When is “talking it over” bad relationship advice?

It’s bad relationship advice when either one or both of you are all worked up emotionally, only arguing for your point of view and not listening to understand one another.

If this is a relationship hole you fall into, slow down and begin asking questions that would invite you and your partner to understand each other at a deeper level.

And it starts by giving the space for this to happen.