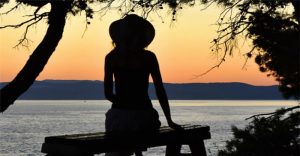 Sally couldn’t stop reliving the past and it was keeping her from the love she really wanted.

She felt lucky to have found Mark after a string of losers but something kept gnawing at her insides and she couldn’t seem to relax like she thought she should.

If you’re in love, you should be happy–right?

She’d been cheated on and lied to so many times in the past and now that she was finally with a “good” guy, she couldn’t quite believe it.

Mark was so nice to her and her 10 year old son, but she was aware that she was “waiting” for him to slip up and disappoint her in some way.

Sally knew that she couldn’t move to the next level with Mark until she could figure out how to stop reliving the past, resolve all this upheaval inside her and start trusting.

Any time he was a minute late in picking her up or he got a phone call, her first thought was that he was cheating on her.

Even though she knew he wasn’t a cheater, she couldn’t stop those thoughts from overwhelming her, closing her down and pushing him away.

She didn’t want to lose him so she came to us for help.

During our sessions, she came to a few realizations.

1. Don’t be afraid of your thoughts and don’t give them energy

Sally had been trying to push thoughts like “All men are cheaters” away but they just kept getting louder.

It seemed like she had a pile of smelly garbage in a can and she was sitting on the lid to keep it contained–but it kept seeping out under the lid, making a real mess.

Instead of pushing those thoughts down (and sitting on them), she discovered that if she allowed them to be there and not give them any energy like telling herself how wrong she was to think them…

They disappeared on their own.

Thoughts are going to come and go and if you know that, you’ll not punish yourself for them or feel like you have to act on or “fix” every one of them.

The bottom line–you don’t have to pay attention to every thought you think!

Sally saw how much of the time her thoughts were occupied by what happened in her past.

She was so afraid that she was re-creating another bad relationship, she neglected to notice that she wasn’t the same person she had been then.

She remembered how withdrawn she had been in the past and afraid of life.

She saw that she had “grown up” and come out of her shell when she had her son and has been raising him on her own for 10 years.

She realized that she wasn’t the same person who had attracted those men who didn’t want to be who she wanted them to be.

As she continued to bring herself into “today,” she saw that the past loosened its hold on her and she could have some compassion and forgiveness for who she used to be.

She could love who she was now.

The past will loosen its hold on you as well if you gently and lovingly allow yourself to come back to the present when you leave.

3. Listen to the truth inside

Sally figured out that she did have a guidance system inside which was bigger than her but that she hadn’t been able to hear its messages.

When she quieted down, she could sense a knowing inside telling her that she was okay and that her next step would be made clear.

She saw that she could open and relax in new ways with Mark, enjoying the moment.

She didn’t have to put pressure on herself to invite him to move in with her and her son within a certain time frame.

She could take it a day at a time and would know when the time was right.

We all have this wisdom and truth inside us that guides us to take whatever step is there to take next.

All we have to do is allow ourselves to listen beneath the constant chatter that can distract us from the truth.

If you want to stop reliving the past, no matter what happened in the past, you can.
Contact us here…