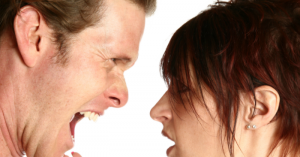 What do you do when your relationship differences collide and you’re stuck at an impasse?

If there’s one thing that’s been the secret for the two of us keeping our love alive and growing over the years, it’s this…

We’ve learned (and are continuing to re-learn) that each of us sees the world differently–and THAT’S OKAY.

When it becomes “okay,” then blame and judgment melt away and you’re left with a curiosity to understand where the person is coming from instead of just simply trying to get your way.

Not always easy, of course–but it does get EASIER.

We’ve come to realize that our differences come from thoughts that have constructed what we call the “rules” we run our lives by.

And we make it all up!

A pile of clothes (not hers) lying in the middle of the floor that her partner had walked around without picking up since she'd been home.

She likes the house very tidy and always immediately picks up any article of clothing that she might leave out.

But her partner is not as diligent about picking up after himself (as evidenced by the pile of clothes).

His mind had been elsewhere and he just didn’t see them–and it hadn’t been his top priority to pick up after himself immediately anyway when she was gone.

It was one of HER top priorities even though if we were to ask her, she might say it wasn’t.

It was one of her “rules” that personal items are picked up and put away immediately at all times.

And when she brought it to his attention, she didn’t hide her anger and irritation.

This seems like a very small example of differences but it might turn into a very big issue if they each started making each other wrong and becoming against one another.

If he began thinking that she was “too controlling” and felt constant negative criticism...

And she continued thinking that he was “sloppy and irresponsible,” they were in trouble.

Biting, sarcastic comments or “You Shoulds” can easily turn into constant fighting and downright contempt for one another over time–which can end connection and passion.

The truth is that differences can show up in all sorts of ways and in fact, they are to be expected when we come together.

We’re all different, after all, and we all look out at the world so differently!

The two of us have discovered that getting a glimpse of how someone else views life can expand and enrich your life if you’re open to not defending that you’re always right and are willing to look outside your “rules.”

Seeing how someone else views life can also show you what you don’t want–For You–which is okay as well.

One woman we talked with wanted her new relationship to move a little faster than it was moving.

He wanted to take it more slowly because his divorce had been final just a few months ago and he didn’t want to jump completely into a new relationship right now.

She does have choices in this…

-She can relax and enjoy the relationship as it grows.
-She can take stock in a few months to see if it’s growing the way she wants.
-She can choose to find another partner who is ready to commit to a relationship after just a few dates (which may not be in her best interest).

What can you do when you’re faced with differences in the person you’re with?

Here are a few suggestions for dealing with relationship differences…

1. When you are “hit” with a difference that really grabs you, stop yourself from reacting in a way of being that seems to be ingrained in all of us–-defending your position. Ask for more information instead and then listen.

In the example of our friends, instead of getting defensive, he could ask something like this…

“Why is picking up my clothes so important to you?”

Instead of being accusatory, she could ask him something like…

“I noticed your clothes in the middle of the floor and I’m also noticing that I have these rules for me that say we pick up our things. Can we talk about how we can both get our needs met around this kind of issue?”

2. Know that you have a choice and you don’t have to agree to anything that you really are against doing. Relax into that knowing.

Neither person has to “give up” who they are but when you understand where the other person is coming from, there’s a little more consciousness in your daily life and more compassion and understanding.

3. Consider the idea that you might learn something from this person about this issue. Open yourself to seeing it from a little different perspective.

Our friend could see that her partner’s very busy life keeps him distracted and he might see that he needs to relax more and become more present in his daily life.

Our friend might see that it's no big deal that clothes are picked up immediately and acknowledge that he does pick them up at some point.

She might also see that it's her thinking that is putting a wedge between the two of them.

Her husband might see that it is important to his wife and become more aware of his piles sooner.

They can play havoc in a relationship if you let them.

When you make the choice to love instead of judge, you’re taking a step toward happier, healthier relationships and life.