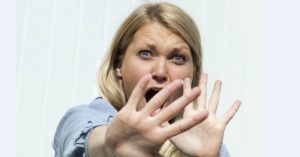 Jeff told us he couldn’t do anything right according to his wife of 30 years and he didn’t know what to do.

He said that even when he was trying to be kind and do things for her, she bit his head off.

More than once, she called him “controlling” when in his mind, all he was doing was being helpful.

They were becoming more and more detached from each other and that’s not what he wanted–but he wasn’t sure what she wanted anymore.

The dynamics between Jeff and his wife are pretty common in couples who have been together for many years and old, hidden grievances are coming to the surface.

–>Go here to find out how to stop talking on eggshells<–

We’ve seen it many times…

After years of “putting up” with certain behaviors from a partner, maybe ones he or she considers to be controlling, the person finally has had enough and is angry with the other person no matter what they do–even if it’s meant in a kind way.

It’s like a solid door comes down and nothing new can be seen through that door.

What’s happened in the past is all there is.

If we had Jeff in front of us right now, here’s what we’d say to him about the pushy or helpful trap they’re in…

All that’s ever going on is that you and your wife are caught up in thinking in the moment that you both believe to be true.

For whatever reason, you both are believing the other is the enemy and not the beloved.

Then you can see that the love that is there does remain.

It’s just getting clouded over by thinking in the moment.

If you’re caught in this kind of pushy or helpful trap, here are a few things to remember…

Don’t make up stories about “why” it’s going on and allow your thinking to settle.

When you make up stories, it keeps your emotions racheted up and thinking clearly isn’t possible.

You’ll be more open to listening without judging and getting defensive than if you’ve got some preconceived ideas about why this is happening.

Every time your thinking says, “She should…” or “He shouldn’t…”, you can remind yourself that you don’t really know.

When you start to see that the love is always there and it’s just clouded over in the moment, something new always arises and it usually arises in the perfect timing.

That’s where the magic is.

Things start to change when the focus is on love and possibilities.

3. Listen with openness and love without an agenda.

We know it’s easier said than done to suggest not getting defensive when your partner tells you what you don’t want to hear.

You want to defend yourself but defending never does get your point across or result in a solution.

Listening to understand where someone else is does open the door for mutual understanding.

If you’re with a partner who you’ve perceived as pushy and controlling and now you’re fighting back with anger, no matter what that person’s motivation is…

Take some time to listen to what’s deeply inside you that you haven’t been able to express.

Listen to your wisdom and not your mind chatter.

And then with love, share with your partner what’s in your heart.

Put your defenses to the side and be open to listening with love to your partner.

When you’re sincerely interested and want to know, the other person will open.

Jeff and his wife don’t have to suffer like they’re doing.

They can open to each other and rebuild their relationship.

And you can to if you’re in the middle of a pushy or helpful pattern.