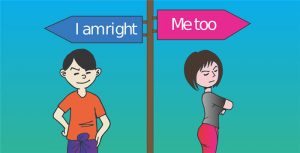 Have you ever been triggered by something that, in reality is no big deal or not even real?

We mean triggered, really bothered and upset by something that in the grand scheme of this thing called your life is not important at all…BUT…when you think about it–it just makes your blood boil.

And you might say things that are very hurtful and that you really don’t mean.

We both have had things like this happen to us…

Susie’s computer, which was at the time 5 or 6 years old, wouldn’t turn on.

Otto had been warning her that it was dying because it kept overheating and shutting down…but she didn’t want the hassle of dealing with buying a new computer.

Well on that day, he got a chance to say “I told you so” without really saying it!

Susie went through all kinds of thoughts as well like…

“Ugh–I hope the data can be saved!”

“Why didn’t I paid attention to Otto and take action sooner!”

But then Otto came to look at the computer and saw that the power cord was disconnected and it had happened when he tripped over it the night before.

The computer then did turn on and the data was salvageable which was a big relief.

And Susie then took action and bought a new computer.

They can also play havoc with any relationship where someone has done something that has triggered you… (especially with someone you’re close to.)

In this small example, we could have really turned it into a big argument over literally nothing…

Sure the thoughts came but we knew we didn’t have to act on them or attach any meaning to them.

“Why didn’t Otto see that he had tripped over the cord when it happened! My upset is his fault!”

and “Why didn’t Susie see that the cord wasn’t plugged in? That’s the first thing you should check when electronics don’t work!”

But on that day, we allowed those to pass on by.

We each took an energetic step back to look at the situation from a broader perspective where we could find the love and compassion for ourselves and for our partner–before we angrily blamed and pointed the finger at the other.

We’ve learned how to handle upsets and you can too!

Does that mean we are always calm and “rational” when we’re upset with one another?

But it does mean that we let those thoughts that could separate us pass quicker and the damaging words aren’t spoken.

It’s not that we’re holding back those damaging words. It’s just that when the thoughts pass, there’s no need to speak them.

The next time you get upset, triggered and really bothered by something…

Here’s how you handle upsets, triggers and tricky situations with love and grace…

1. Recognize that your thoughts are just thoughts and may or may not have any truth to them.

Most importantly, you don’t have to believe every thought that rolls through your mind.

2. Take a breath, calm yourself and don’t act from your angry triggered place inside you.

In fact, don’t act at all until you know what’s really going on. Use one of our “magic words” phrases and ask for more information from a place of genuinely trying to find out more so you can understand:

“Can you tell me more about that so I can understand?”

When you are open to understanding and listening to another’s point of view, it takes the “fight” out of the situation so a solution can show itself.

3. Allow compassion for yourself and your partner to arise inside you and look for what you want rather than for what you don’t want.

Go for allowing the solution to be made clear and that won’t happen if you’re mired in blame and judgment.

We’re all human and getting triggered about something is natural.

But you don’t have to let it run your life and ruin your relationships.