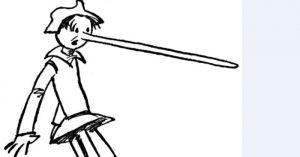 What a double-edged sword honesty and truth can be!

We all say we want to be "truthful" and to be told the truth..

But do we really?

If we're really honest with ourselves about our relationships, when it comes down to it, the "truth" we usually want to hear is the one we agree with.

We just caught the 2009 movie "The Invention of Lying" and although we agree with the reviewers that it's not the best film we've seen...

It did have a few things to say about lying and telling the truth.

In the film, we saw and felt what it might be like if everyone told their truth in every moment. In fact, they couldn't tell a lie--except for one person.

The result of all this truth-telling was pretty uncomfortable at times for the people involved--even if it was funny to watch.

The "truth" is that in most relationships--

One or both of you dance around the truth or omit things that are important to you because you don't think your partner will like them and will get upset.

When you do this, you are putting up walls to intimacy and barriers to deeper connection--no doubt about it.

But you don't want to hurt the other person with honesty, right?

What we ALL do to greater or lessor degrees in our relationships is to NOT tell the "whole" truth with the people in our lives and most importantly...

We don't usually want them to tell us the whole truth either, especially if it's uncomfortable to hear it.

If everybody was completely honest (judgments included) in ALL their communication, it might just be too painful.

If we're really honest with ourselves, there's a payoff for not being completely honest in our relationships.

We get to make sure we don't hurt anyone and they won't hurt us as well. (Well maybe in the short term.)

But is this NOT being completely honest good or bad for creating close, connected relationships?

This leads us to a question around this topic that we're guessing you can identify with because we've coped with this one ourselves and it's also a question that many of our "Relationship Breakthrough" coaching clients have had as well...

***QUESTION FROM A READER ABOUT HONESTY:

"How do you keep honesty and intimacy in relationships without becoming upset when told the truth?"

We all know that it's a piece of cake to be honest with someone or to really hear what another person says if you think the message is something you both agree with and neither one of you finds objectionable.

It's EASY to be truthful.

But what if you have to tell someone something that might be upsetting or even make that person angry?

And what if someone tells you something that you'd rather not hear or believe?

Not as comfortable to tell or hear the truth, right?

It's the way many of us are made up--to not want to be hurtful and to get along.

But what happens when we disagree with someone--someone we love--or he or she disagrees with us?

Some of us hint at the truth or completely ignore it, hoping that it will go away without ever letting the other person know how we really feel--just to keep the peace or any other reason.

When this happens, it pushes the two of you further from love, intimacy and connection.

When the two of us first came together, we made an agreement that we would be totally honest with each other so that we could keep our passion and connection alive.

We had both done it the other way and knew that it didn't work so we wanted to be sure we didn't make that same mistake twice.

It sounded like a good agreement but when we started putting it into practice, it wasn't as easy as it seemed--even though there was and is great love between us.

Like a lot of people, it took a lot of courage to find out what was true inside us and then to say that truth so that the
other could hear it.

And hearing it was another story...

When faced with being told something uncomfortable about ourselves, what you might imagine happened to us too.

We got defensive and either shut down, got quiet, withdrew or got angry and sarcastic.

When faced with the "truth" that we didn't necessarily agree with, we fell into old patterns, just like most people, even though we had made this wonderful agreement.

What did we do to get out of our old habits and do it differently?

Here are 3 ways we learned to stay open to each other, even when it's been tough, so that we could build our capacity for honesty, trust, connection and intimacy...

That's what they both are--stories.

We all have very different ways of viewing the world and if we are to be in relationships with each other, especially intimate ones, we have to stop expecting that we'll all think exactly alike all of the time.

It just isn't so.

When you recognize that you have a viewpoint that might be different from the other person's that is made up of very different life experiences, you can be a little more open to just finding out what makes them tick, instead of trying to defend yourself and your ideas.

In other words, before you accuse or get defensive, get curious instead.

2. Recognize that you always have choice.

Just because your partner says something about you or something that he or she thinks has to happen or not happen, you still have choice.

We all defend when we think we don't have choice.

When the two of us remembered that very simple idea, we stopped being so defensive and could listen to one another at a deeper level.

3. Listen to hear if you can find any truth to what's being said, even though it might be painful to hear.

There have been times when Susie would say something to Otto (or to someone else) and she didn't realize that sometimes her comments sounded "bossy" and "controlling."

When it was pointed out to her, of course she would get defensive.

Because of our agreement, she learned how to stop herself by taking some deep breaths and stopping the words she normally said in defense.

In her mind, she learned to rewind the tape of the incident. Usually she could see how her comments could have been taken that way, although that wasn't her intention.

When she thought about it... and located that truth, she said one of the "Magic Words" or phrases that we teach in our "Magic Relationship Words" book and audio program.

"You are right. I can see how you might feel that way although it wasn't my intention."

And then she told Otto (or the other person) what she was feeling when she said those "bossy" words and used that particular tone of voice.

She was honest about what was inside her and what she was feeling.

Each time the two of us share in this way, we create deeper intimacy and truth between us.

We've found that it all starts with stopping yourself from what you habitually do when you feel threatened, treated wrongly or misunderstood.

In doing this, we in no way suggest that you are to become someone's "door-mat."

It's really just the opposite when you stop yourself from getting muddled in defensiveness, anger or fear.

When you do change from your old habits, you are able to speak more clearly, understand one another and create deeper love between the two of you.

So does it pay to not be honest in your relationships?

It only pays if you want to remain distant from others.

If you want to create more passion, intimacy and connection, it doesn't.