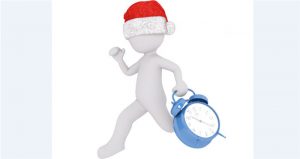 One of the ways to less stress and avoiding holiday landmines with family and friends is to realize that it’s all an inside job that we create with our thinking.

“Wait a minute–my stress is real because I don’t have time to get all the shopping, wrapping, baking, and cleaning done that HAS to be done. Also my brother (sister, aunt, uncle, mom, cousin, etc.) is coming for a visit who really gets on my every last nerve! That’s not my thinking! That’s real!”

Of course it FEELS real but here’s the thing…

Holiday stress (or any kind of stress) comes from believing thoughts about how your life has to be a certain way in order for you to be ok or happy.

So many people anticipate the worst ahead of an event, a situation or interaction with someone else and when their reality doesn’t match up to what they thought had to happen overwhelm and stress pop up from almost out of nowhere.

It might be that you’ll be seen in a bad light if something doesn’t happen or someone will be disappointed in you.

The bottom line is that the stress (especially holiday stress) does come from expectations we put on ourselves and others.

Here’s an example of what we mean…

Patty and her adult daughter Rachael had had a very complicated relationship that could be described as “push-pull.”

The “pull” was Rachael enlisting Patty’s help for childcare and big projects she started but the “push” came when Rachael felt like Patty was taking over.

Rachael would then accused Patty of smothering her and taking over and Patty would get her feelings hurt, thinking she was wrong.

She would always end up apologizing without really knowing why.

With our help, Patty saw the “push-pull” dance and decided to let it go especially after their blowup over Rachael’s big home remodeling project that she wanted to have done before Christmas.

But she realized that she had fallen once again into their familiar trap of Patty “taking over” the project to get it done in Rachael’s time frame.

Patty saw that her stress came from her thinking that she had to “please” Rachael by getting the job done and that required her to take over the responsibility of doing it.

Her stress didn’t come from the situation.

It came from her thinking.

When she saw this, she settled down, didn’t get hooked into Rachael’s stress, and could ask what kind of help Rachael wanted.

Patty could then see when it fit into her schedule to help if that’s what Rachael asked.

Somehow Patty had kept trying to make Rachael happy but it always turned against her.

When she stopped trying and just opened to loving Rachael by asking what help she wanted, their relationship grew closer.

A lot of stress is brought on by our thinking that things need to be a certain way for us to be happy.

When you open to possibilities, you can see there’s room for something even better than you thought.

We invite you to enjoy every moment with the people you love, especially during the holidays, and it’s possible if you see that stress is an inside job that doesn’t have to take you over.

If you have a question about the stress you’re living with,
contact us here…