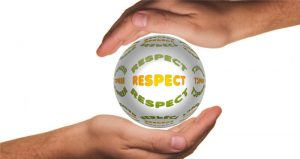 Getting the respect you deserve and want in love and life can seem like an uphill battle.

If there’s one thing we all seem to want in love and life, it’s respect.

And when we don’t feel it from someone, especially someone we love, we can have any number of reactions from pulling away to fighting for it.

But here’s the thing about respect…

It means something different to everyone, even though we think the meaning of respect is universal.

One person we coached thought she was being disrespected because her boyfriend didn’t answer texts as soon as she thought he should.

And when she told him he was being disrespectful, he didn’t understand.

The truth is that another person might not classify the lack of an immediate text response as “disrespect” but our coaching client did.

So in order to have more respect, become aware of your unique definition and be aware that it may not be your partner’s definition.

That one suggestion can help you to not get immediately triggered when you think you’ve been disrespected but rather allow you to step back, getting curious to find out more.

Respect is an inside job–created inside you for yourself.

“I DO respect myself but my partner is the one who disrespects me!”

Okay, here’s what we say…

Go back and really look at if you are truly respecting yourself in the way you think your partner is disrespecting you.

As we talked, she discovered that she didn’t feel important to her boyfriend when he didn’t immediately text her back.

She also saw that she tended to “lose” herself in whoever she was dating, ignoring her girlfriends and other parts of her life that she had enjoyed.

She realized that she could start giving herself the respect she wanted by re-establishing her friendships she’d ignored and going back to Tango classes that she’d loved before.

And they could come to an understanding about how best to communicate and how they each wanted to “be” in their relationship.

Of course, sometimes you can get yourself into a situation where another person treats you badly…

And if that’s true, you can decide from a clear place inside you whether to stay in that relationship or not.

Your decision doesn’t have to hang on that vague word “respect.”

What if this person isn’t disrespectful but has a different view on life and ways of doing things?

What if you didn’t have to make this person wrong but rather see how you can better come together?

Getting the respect you want in love and life starts with you and a clear mind and heart–as well as seeing what respect really is.