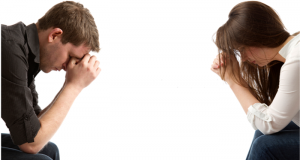 Hands down, the worst day of my life was not when my father died on my birthday. It wasn’t the day we filed bankruptcy because of all bills that remained after our son was born with health problems.

It wasn’t either of the two times I had “kidney stones” which hurt so badly I kept vacillating between thinking I was going to die and wondering whether I should pray to die.

No, as difficult and as painful as those things I just mentioned were personally, emotionally, physically and spiritually they didn’t even come close to the worst day of my life.

The worst day of my life was the day my ex-wife and I sat our son, who was eight years old at the time, down on the couch in our living room and a few moments and four simple words later, I broke his heart.

This is when I told him, “I’m leaving your mother.”

It took a few moments for the news to register and sink in for him. But then, tears began to flow from his eyes. His lips and mouth began to tremble and he somehow mouthed the words in the form of a question, “You-you-you’re getting a divorce?”

His question sent my mind racing furiously for what to say next and how to let him know that I still loved him and that I always would.

The only words I could find in that moment somehow seemed so cold, so calculated, so distant and so inadequate for the task of the moment.

The words I said were simply, “I’m leaving your mother. I’m not leaving you.”

I don’t remember anything else from that night my son’s world changed forever. I must have blacked it out or blocked it out. It was too much. It must have been just too painful.

What I’ve since learned is that divorce can be a cruel joke or a divine gift and if you look hard enough, it can be both of these things.

That night, to my young son, it was no gift. It was the beginning of a lifelong journey of trying to navigate loving and being loved by the two most important people in his life.

Divorce can rip your heart right out. It can cause you to hate each other. Hate yourself. Hate God.

As painful and as tragic and devastating as divorce can be, it can also be a divine gift of the highest order.

It can be difficult to find this divine gift that only seems to be found by the “lucky ones.”

For the ones who wanted the break up or divorce, on the surface it can seem like they get an emotional free pass or “get out of jail free” card but this isn’t always the case. Sometimes the guilt, shame and residue of heartbreak can creep in later–long after you think the healing has taken place.

For some couples, breaking up can be done with ease, grace and in total love. They can begin their relationship as lovers and can end (even after a break up or divorce) as the best of friends.

Unfortunately, this wasn’t my path.

Divorce can cause you to do things (all in the name of love or doing the “right thing”) that you might come to regret later.

I left jobs I should have kept. I didn’t take jobs I should have so I could spend more time with my son in hopes that over time, I could prove to him what I said to him on that fateful night– “I didn’t leave him. I left his mother.”

After going through what could only be called an ugly divorce, I’ve blamed myself, tortured myself and have spent countless late night moments alone fighting with the demons of regret, pride and self-worth.

This post-divorce pain I experienced wasn’t because I chose to leave but because of how things ended and how I’ve wished I had known how to do things differently in the end.

Because of what I’ve seen and what I’ve experienced, I now completely understand why some people just vanish after a break up or divorce.

Never to be seen again—even by the people they love.

They leave their kids, their family, their jobs, their home, their city and everything they know and start all over.

Men and women alike do this because sometimes, for some people, facing the truth and the reality of the situation is just too painful. It’s too hard, too full of sadness, too full of regret, too full of heartache.

And I know these feelings all too well because I thought about it.

I couldn’t take that path for two reasons.

First, I had hope that I could find the love that I really wanted—a love I wanted above everything else with a true spiritual soulmate who was interested in exploring love and life in the same ways I wanted.

The second reason was my commitment to love my son and be the best dad I could possibly be.

I haven’t always been perfect, but I’ve kept my promise to myself and by default—to him.

1. Divorce doesn’t have to define you.

So many people whose lives have been affected by a break up take this one event and inadvertently let this event define them and how they choose and allow themselves to move forward after the breakup.

You’ve got the irrefutable facts and truth of the situation and then, you’ve got the story of what this one event means.

Never let a divorce or any other event define you. You are so much more than that.

2. Next, I’ve learned that you don’t have to drag the pain of the past of your divorce into your future.

You can make peace with anything and everything that has happened to you (even if you didn’t cause it or want it).

3. There’s always another part of the story you don’t know or can’t see.

What you think is true or the reason something happened may not be true at all. It would be really sad, tragic and heartbreaking to live your life in reaction to thinking and believing something was one way and have it turn out to be another.

Unfortunately, divorces and break ups are a fact of life. The pain and heartbreak of what happened is real.

One of the things I know for sure is the last chapter of your life has not been written yet and there’s always a divine gift in every situation if you’re open to seeing it and allowing it to unfold.

I have looked for and found many divine gifts as I’ve traveled through life.

For example, my journey has helped me have a closer connection to God, our creator, the Great Spirit, the Universe—The Divine.

I’ve also gotten to learn compassion and love for myself and others at a whole new level than I think I would have otherwise.

I’ve seen, both in my own life, and the lives of others, that you never know what someone else is going through, what they’re struggling with and why what they are always doing makes total sense to them in the moment.

Because of this, I’ve become kinder and more loving to myself and others instead of angry. I’ve also become more open, curious and open-hearted instead of closed.

A question for you is this…

Has a divorce or a break up affected you in your relationships or life in ways you don’t like or don’t even see?

For most people, the answer is yes.

If you’re someone who suspects that something from your past could be getting in the way of the love or life you want, let’s talk.

Or there’s some other part of your life (job, career, family, relationships) where you feel stuck and would like some help…

Reach out to us here and let us know what’s going on and we’ll schedule a time to talk with you as our gift.