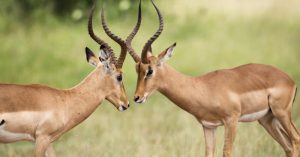 What we’re calling the blame game is a habit many couples get into after the “honeymoon period” of the relationship ends. It’s when one or both people suddenly see faults in their partner that they didn’t see before.

As one or both partners point out those “faults” and what the other does that is “wrong,” both get defensive, lash out, and shut down to each other.

Since for a lot of people, it’s easier to point a finger at someone else when you have to discuss thorny issues and things don’t happen the way you think they should.

The relationship climate becomes primarily toxic as the two people repeatedly dive into a negative spiral.

In one of our previous blog articles, Who’s to blame (and the problem) here?, we talked about the blame game–how the two of us got caught up in it and how we stopped it.

In this article, we want to talk about how the blame game plays havoc in relationships and how it doesn’t have to.

1. Pits each person against one another instead of being on the same team

The two people become adversaries instead of approaching life as a team when they get into blaming each other. Life become very difficult as they feel alone in the relationship and can’t see how anything can change.

2. Simple discussions turn into defending positions with no resolution

When the blame game takes hold, there is no chance for a simple discussion that leads to a resolution of a problem. Both people are so caught up defending their positions, they forget how to listen to one another and open to some new thinking. Simple discussions are not possible and the two are reduced to talking about logistics (if that’s even possible) and not about anything meaningful.

3. Walls are built between the two people

Even if they once felt connected and very much in love, when two people get into the blame game, they build walls and can no longer feel that connection.

4. Blame becomes the overall feeling and goes to contempt

Blame and negativity become so consuming the two people lose sight of any good parts that still might be left. The focus is so much on what’s wrong, they can’t see any bright spot at all.
If someone brings up something that’s good in the relationship, there’s a “yes, but…” that always follows.

After awhile this negativity creates such a negative atmosphere in the daily lives of the two people, they feel hopeless and that it will never change.

Ok, so we’ve painted this pretty dismal picture of what the blame game does to relationships…

What do you do if you’re currently playing this game and want to stop?

First of all, it certainly is possible to stop and you start by becoming aware of what the two of you are doing, focusing on yourself and your part in it.

Then you stop reacting in the same old ways you have reacted when the game gets started.

(And yes, one person can certainly change it!)

We’ve discovered that thought creates feeling and from the feeling, we act so it starts with playing with the possibility that the thought that your partner is completely to blame isn’t true. In fact, no one has to be blamed to find a solution.