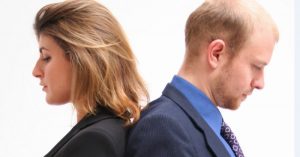 Joan and her husband Paul were caught in a dangerous, toxic relationship loop and couldn’t get out of it.

Paul had spent a great deal of money without telling Joan and it wasn’t the first time.

Over the years, she had become anxious about their family finances and at one point, even feared losing their home because of his spending habits.

She had become hard and distant toward him, criticizing just about everything he said or did.

He had become wary of talking with her about anything, spending as much time as possible alone in his home office.

Although they didn’t say these words aloud…

They both realized their marriage had become a toxic relationship.

They both wanted to get out of the trap they were in but didn’t know how.

If there’s some part of you that can relate…

Here are 3 ways to break free from a toxic relationship…

We all have inner chatter that tells us the worst possible scenario will happen. For whatever reason, it’s more seductive to believe the worst instead of realizing that other outcomes are possible.

When Joan became conscious of her inner chatter, she realized that she had lived with the fear of being homeless for many years and it hadn’t happened.

She saw that her fear and constant thinking about their finances had stopped her from connecting with Paul in any way.

She had wanted him to “step up” and approach their finances like she did, but she had closed down any chance of them working together.

When Paul tuned into his inner chatter, he saw that he had made Joan the enemy, keeping him from doing what he wanted. He saw that his buying “stuff” and hiding the fact was his stubborn way of an old pattern of rebellion that he hadn’t let go of.

2. Listen to what’s deep inside you, the wise, still voice. Get quiet so you can hear what you truly want.

When you see that you have made up and believed stories that may or may not ever come to pass, you can see a small crack where truth can seep in.

That “truth” can lead you to what you may have been unwilling to acknowledge or see in the past because it had been masked by all that thinking.

When Joan allowed her stories about their doom and gloom future to settle, she quieted and could listen to what she wanted.

She realized that she did want her husband back and she wanted them to work together as partners again.

When Paul saw his “rebellion” in a new light, he could listen to what was beneath it inside him.

He realized that he had rebelled because he feared being controlled and losing his freedom.

He saw that he had made it all up.

He realized that he missed Joan and there was a longing to be with her in a way they hadn’t been for such a long time.

3. Take a conscious step toward what you know is right for you.

When you can see underneath all your thinking to the truth of what you want–and open to the possibility of it–then you can take a conscious step toward it.

It may be that you’ve been lying to yourself about what’s truly good for you and it’s time to take a step toward ending the relationship.

It may be, like Paul and Joan, you can see an opening and willingness for a new beginning and take a step toward that.

Laying aside their old grievances toward one another, Paul and Joan took a conscious step toward talking about what they wanted for their relationship.

They talked about how they each had spun stories and believed them about a fearful future in different ways.

They talked about getting some professional help to sort out their finances.

They talked about Paul getting some help with his spending habits.

They talked about spending more time together and having fun again like they used to.

They were truly honest with one another and listened to each other in a way they had never done before.

A toxic relationship can be transformed into a loving one if both people see that this is what they want and are willing to open to something different.