Mutual friends introduced Paula and Rod and soon after, they started dating, became an exclusive couple, and moved into Rod’s condo together.

Rod owned a plumbing business and needed an office manager–Paula was between jobs so he hired her, thinking that would solve his problem and hers. 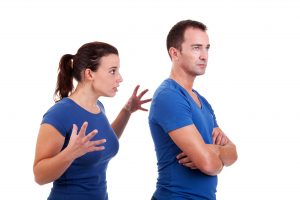 The problems for them started when, according to Paula, Rod couldn’t stop being the boss when they left work and went home together.

She felt like everything she did was wrong in his eyes, especially when it came to money.

Paula was not feeling equal in the relationship.

He felt like she didn’t contribute enough financially to the household expenses. When they went on trips together, he thought he paid for everything.

He was also angry because of the amount of money she spent on her adult children, telling her she “spoiled” them and shouldn’t have to support them.

Rod was not feeling equal in the relationship.

Their arguments had escalated so much that they both knew if they didn’t so something different, their relationship would end.

So they contacted us for coaching sessions to help them untangle what they both considered to be a bad situation.

1. Get clear about the beliefs behind your actions.

During our conversation about thoughts and beliefs that prompted actions…,

Paula shared that she believed being a “good” mother meant giving her kids the majority of her pay each month. She also thought since Rod owned his business and made much more money than her, he should support her.

Rod shared that he’d been raised with both parents contributing equally financially to the family and he continued to believe that that’s how it “should” be.

He thought that even though Paula made quite a bit less than him, she should contribute more than she did.

They each saw how their conflicts came from these beliefs and that maybe their lives could look different going forward.

As we slowed down some of their interactions that had created conflict in the past, they both saw something new.

They realized had they each had continued their feeling of not feeling equal by sarcastic remarks about the other.

Rod saw that he often made snide comments about Paula’s kids and Paula saw that she often called him “boss” in a nasty, sarcastic way.

Seeing that these comments only continued their arguments and not solved anything, they decided to stop themselves before they made them.

4. Come into the present moment and remember what you love about each other.

Instead of continuing to pick each other apart, they learned to allow themselves to come into the present moment and remember why they loved each other instead of why they didn’t get along.

They realized that the present moment was all they had and they were going to make the most of it.

As we talked, both Rod and Paula realized that they had “mushy” agreements or none at all.

In uncovering their beliefs, they understood each other at a deeper level and could listen like they hadn’t been able to in the past.

Paula agreed that she probably didn’t have to give her kids so much money and Rod admitted that their financial situation wasn’t equal and he was willing to contribute more.

Feeling heard and understood, they came up with a solid plan for sharing living expenses that they would experiment with during the next month.

Both Rod and Paula realized that they hadn’t spent time together doing anything other than argue.

They decided to take a break from talking about their problems and go on a picnic in the woods on Saturday like they used to do.

They decided to just enjoy nature, good food and each other’s company and see where it all went.

Not feeling like an equal in a relationship can come in all shapes and sizes.

If you’re in this kind of situation and want out of it, know that you can.

Know that you can get back to love–for yourself and for the other person.