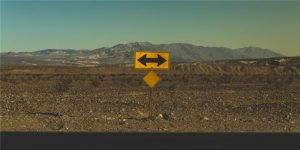 The getting struck by lightning kind of realizations and discussions that rock your world.

And they certainly can be what other people say, do and the interactions with them that determine the outcomes in your life.

While that can all be true, that’s not always the way it goes.

Many times, it’s the small, unexpected thoughts you have and your reaction to those thoughts that create make-or-break moments in relationships and life.

A woman we know had one of these turn-your-world-upside-down kind of moments when her boyfriend told her he wanted to move several states away to live where it’s warm because of his health and near his daughter–but still be in the relationship with her.

Although we don’t know for sure, he probably had had thoughts about leaving for awhile which led to this perceived make-or-break moment with our friend.

So if there’s a “trick” to navigating those make-or-break moments, what is it?

Even though it may seem that way…

It’s never the event that happens that makes it a make-or-break moment.

It’s the thoughts you have about the event, whether you believe them or not and what you think you should do or not do about the situation (based on your thinking in the moment) that really determines whether it’s a true make-or-break moment or not.

In her mind, it could be because of her thoughts about whether she wants to be in a long distance relationship and if they can make it work or not.

Although it’s tempting in a perceived make-or-break moment like this to futurize and fall into fearful thinking, she doesn’t have to.

Along with embracing her sadness that he’s leaving, she can see that there can be possibilities in this event and know that life does have a way of working out–even though it may not look that way in the moment.

We’ve seen that make-or-break moments in our own lives are made up even though they look real.

The only thing going on when this happens is you’re putting energy and belief into one thought over another and calling it reality.

Sure, our friend’s boyfriend’s living situation is going to change–that’s real.

But it doesn’t have to mean anything more than that fact.

Separate the fact from the stories you’re making up about the situation and when you do, you can meet both your thoughts and your discussion with love rather than fear. And love always creates an opening.